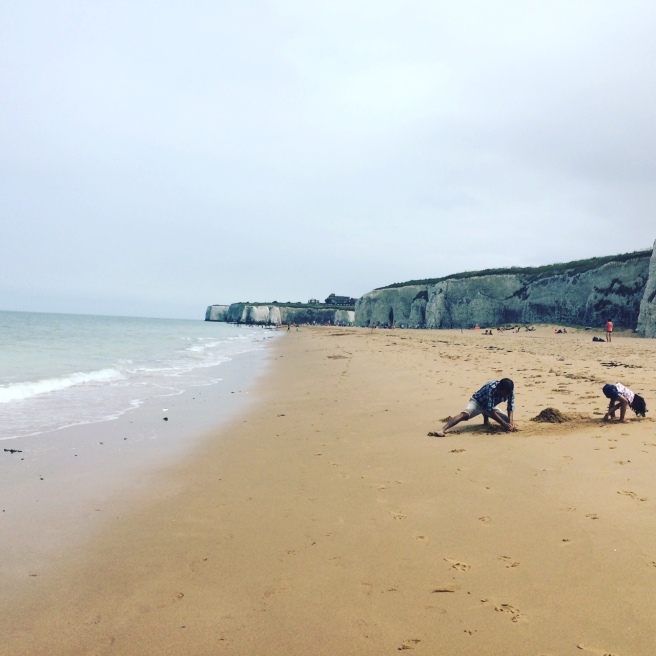 July started with a beach – Botany Bay at Broadstairs, very busy with families on a warm Saturday. A lovely stretch of sand with the surprise of a naturist section at one end for those so inclined and prepared to trek from the steps, or scramble down the well-used track! One to go back to on a crisp autumn day, I feel, to appreciate the chalk cliffs and natural structures at the other end.

July visitors were treated to Goodnestone Gardens, where the blue hydrangeas, cosmos and agapanthus were doing particularly well. The Magnolia grandiflora was having a second flush of flowers, too. And on my third visit, a friend pointed out the mulberry tree, laden with fruit, so I tried mulberries for the first time in my life. Very delicious they were, too! I wish I could have taken some home but it seems they don’t travel well. 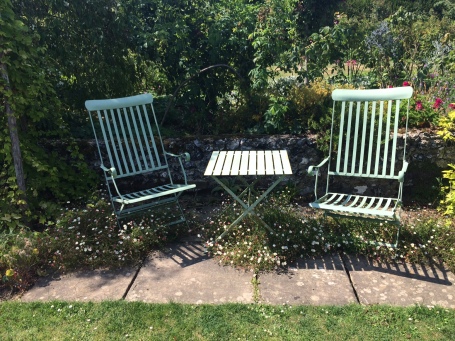 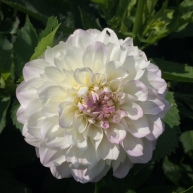 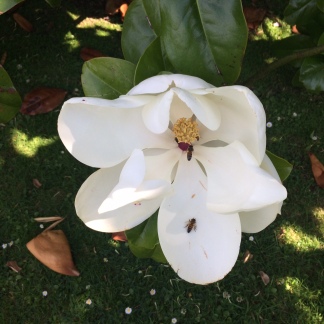 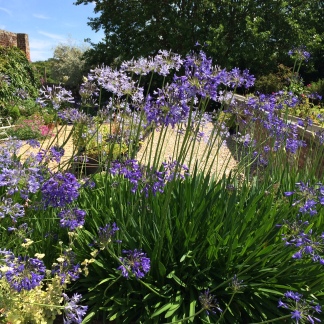 The Salutation gardens weren’t forgotten this month, either. The borders were full of lush growth and the dahlias were getting ready to be at their best for their show in September. I have a love-hate relationship with dahlias – they remind me of the gardens of my childhood, but not in a good way. I think I prefer them as cut flowers… 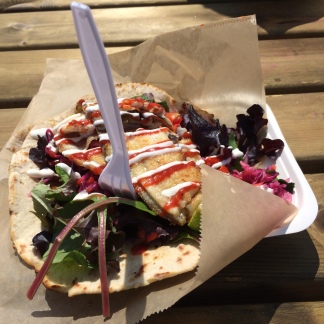 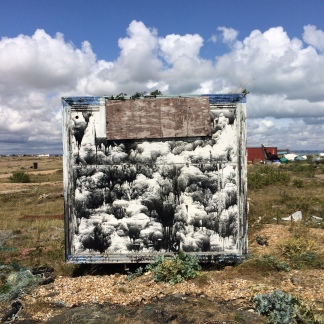 Venturing further afield with friends to Dungeness on a very blustery day, we lunched at the fish shack (not the one in the picture…) and had to hang onto our food to prevent it blowing away! My local fish flatbread with salad, chilli sauce and crème fraiche was fabulous for a fiver. It felt a little odd and intrusive being among coach loads of tourists staring at the houses though. Perhaps somewhere to visit on a (less windy) summer’s evening, or on a bleak winter’s day.

I did manage to squeeze in a few artistic pursuits amongst the outdoor trips. A (very) local artist, Jo Aylward, held an open studio and I bought a couple of her lovely nature-inspired prints and was very taken by her printing onto fabric, too. She’d produced beautiful bags and cushions and a quite stunning linen curtain which she was using in her studio – check out its lovely interior, and her work, on her Instagram account. 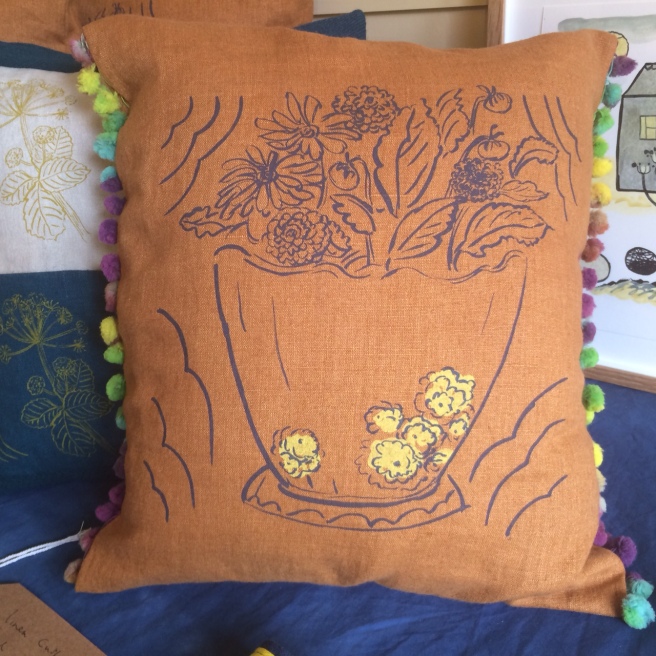 I also took a trip to the Turner Contemporary at Margate, with work by Phyllida Barlow and the British-Kenyan artist Michael Armitage on show – one particularly powerful work by the latter. I particularly enjoyed the exhibition of work from local Kentish schoolchildren, and from Africa. Lunched outside at The Greedy Cow (Beetroot houmous and rose harissa flatbread) before wandering around the galleries and vintage shops and walking the seafront, the beach packed with daytrippers enjoying huge family picnics and BBQs. 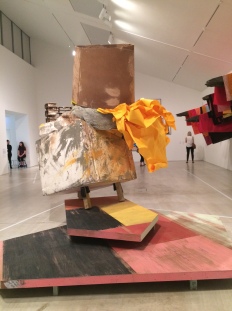 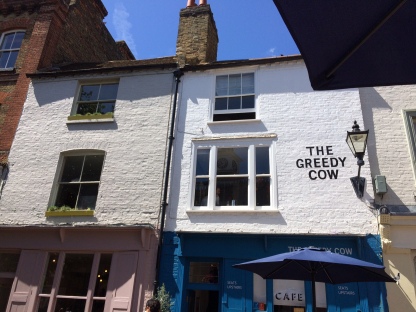 I made my first trip to the fabulously named Beaney House of Art and Knowledge in Canterbury to see the Taylor Wessing Photographic Portrait Prize show, with fascinating information about each piece. Another place to go back to, to explore the permanent collections. Then lunch at one of The Goods Shed cafés – not flatbread this time…

To celebrate the first week of the school summer holidays the rains came. Gardening went on hold, writing became serious against a self-imposed deadline, but I did take a trip to St Augustine’s Abbey in Canterbury, again, and marvelled that this huge site is hidden away beside a busy road – and has escaped being built over. Dating back to the sixth century and home to a succession of ecclesiastical buildings of increasing grandeur, it’s another place that demands a second visit to take it all in.

I went to see the very popular ‘summer blockbuster’ Dunkirk and discovered it was not for me… I found the story and the coincidences a bit laboured and, not being very good at identifying WW11 planes, got rather lost in the crucial aerial dog fights. There’s no denying it’s a high-tension movie, though, and there’s probably someone for everyone in terms of the male casting! 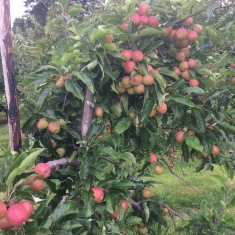 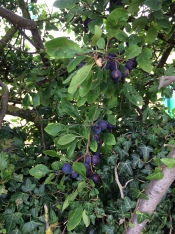 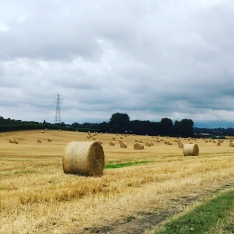 In between showers, there was a chance to do some walking, and to discover autumn approaching – in the third week of July? The brambles were ripening nicely, the apple and pear trees were heavily laden, plums, damson and sloes were nearly ready for picking and the hawthorn berries were profuse and beginning to show their first hint of colour. The garden shrubs demanded pruning and the endless dead-heading of the roses went on between the showers, worthwhile because the bushes have benefitted from the rain and are producing a second flush. The self-seeded buddleia and pink flowering plant (so prolific it must be a weed…) are both butterfly-and-bee magnets. 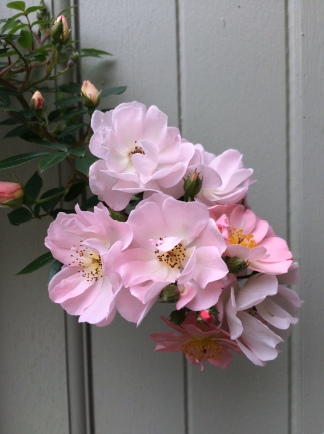 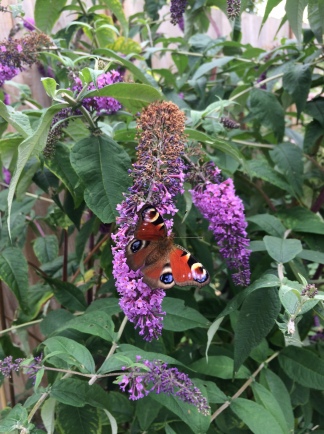 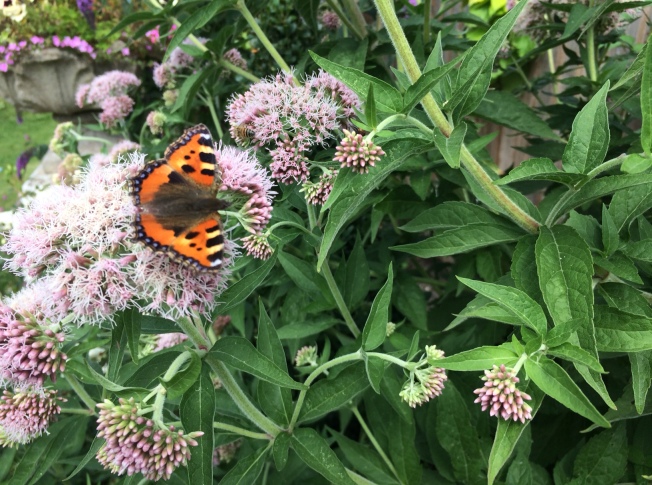 July finished with a private view. Dennis’s exuberant images, mainly from a trip to Spain, are guaranteed to uplift the spirits. I wasn’t able capture a photo over the heads of everyone crammed into the wine bar, but here’s one from his previous show to give a feel for the kind of thing. 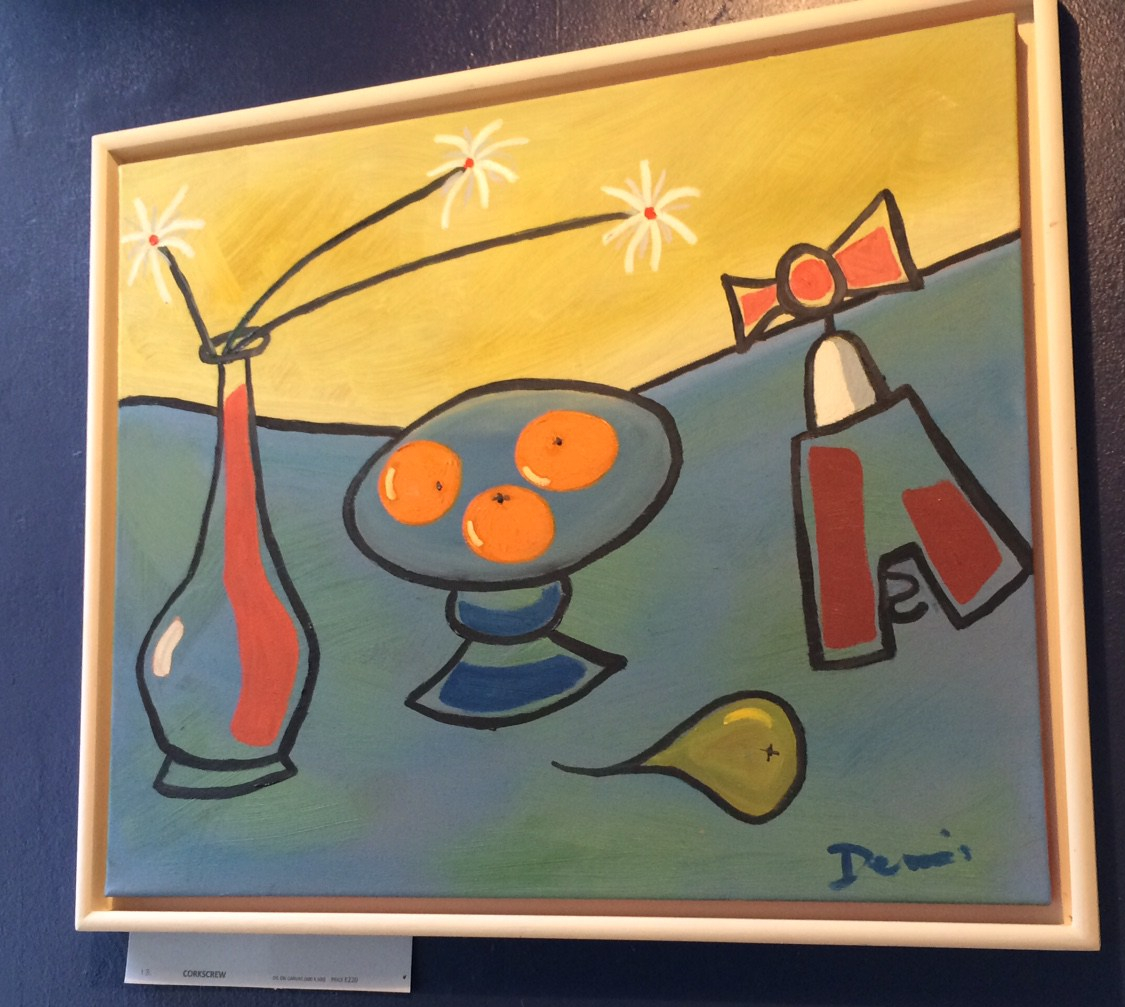 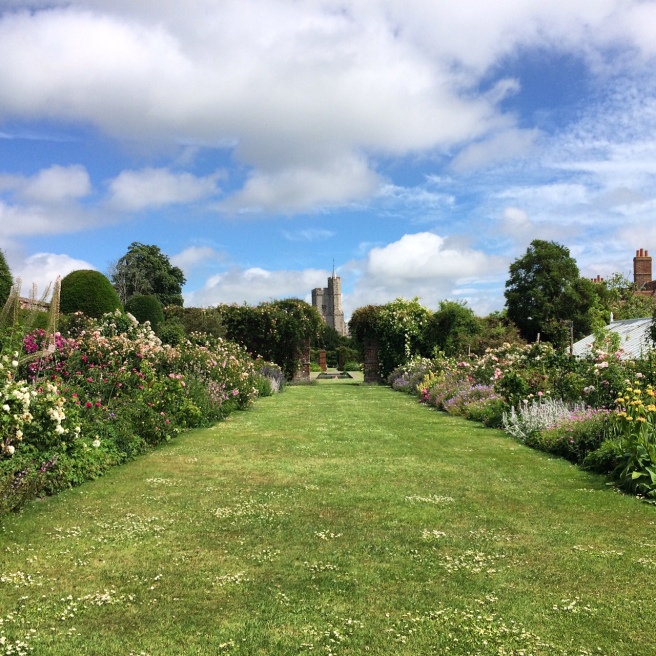 It was a great time for gardens, even if mine was parched from the lack of rain by mid-month. Goodnestone Gardens looked splendid at the beginning of June, then the weather was more uncertain by the time my birthday (and election day) dawned. The sun came out, though, in time for a birthday tea organised by my book group. More birthdays followed – a good excuse to make a cake. 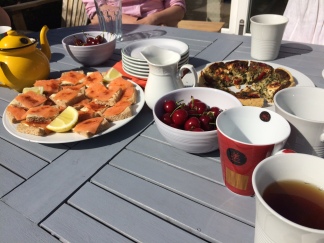 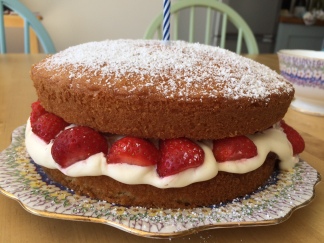 Early in the month it was good to see the Little Gardens of Sandwich on their public open days and marvel at the variety of styles tucked away behind properties large and small, then be tempted by the specialist plant stalls. A couple of visits to the Salutation garden found the borders packed with interesting plants along with some fabulous seedheads – and a rather lovely secret door. I found myself deadheading roses everyday at home but the bright pink (sadly unscented) roses that bloomed in profusion out at the front might prove too much of a challenge for me. The white hydrangeas are now looking spectacular to make up for the fading of the roses, while sweet peas bought from the local post office filled jugs until the middle of the month. 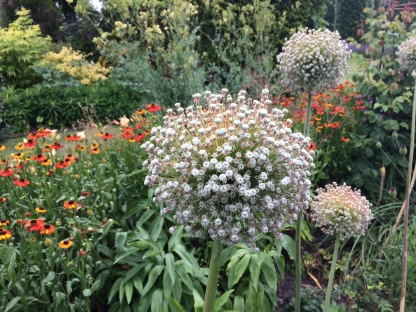 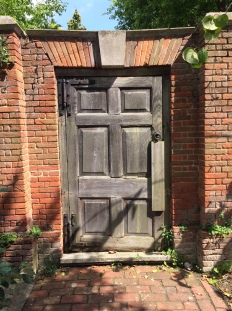 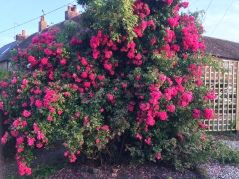 It wasn’t all about gardens –  I made a visit to London and satisfied my wish for a masala dosa, went to the Marlowe in Canterbury to see the fabulous performance of Jane Eyre by Bristol Old Vic and spotted poppies and hollyhocks growing on the beach in Deal. I also spent a puzzling few hours at Dover Castle. Glorious on the outside, a lack of information boards inside meant detective work was required to work out the significance of the refurbished rooms. Best bits – the lit fire in the King’s bedroom, illustrating that the fires really could heat a big, draughty room (in midsummer…), the (reproduction) Mappa Mundi and the atmospheric galleries – unadorned with uneven floors and ventilation shafts/spy holes into the main castle giving, in my view, the best glimpse of what castle life might have been like in the 1400s. 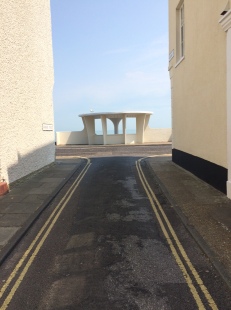 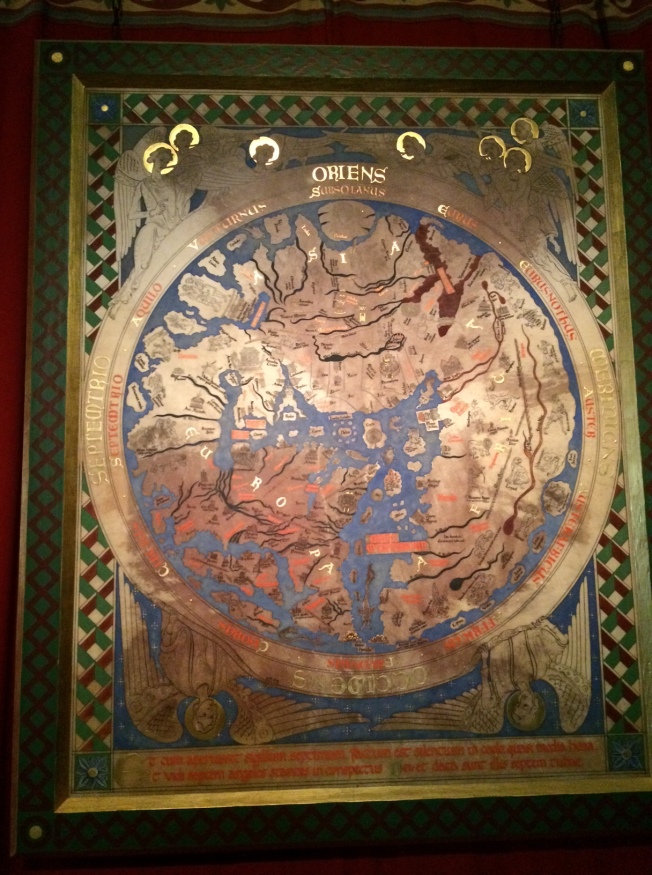 A visit to the Pines Calyx museum, tea room and garden in St. Margaret’s proved more successful. A beautiful garden featuring stunning views and an unusual flower bed formed from the ancient façade of a London house, it made the perfect way to round off the month. Apart from completing the re-painting of my summerhouse inside and out – a new writing space, maybe? 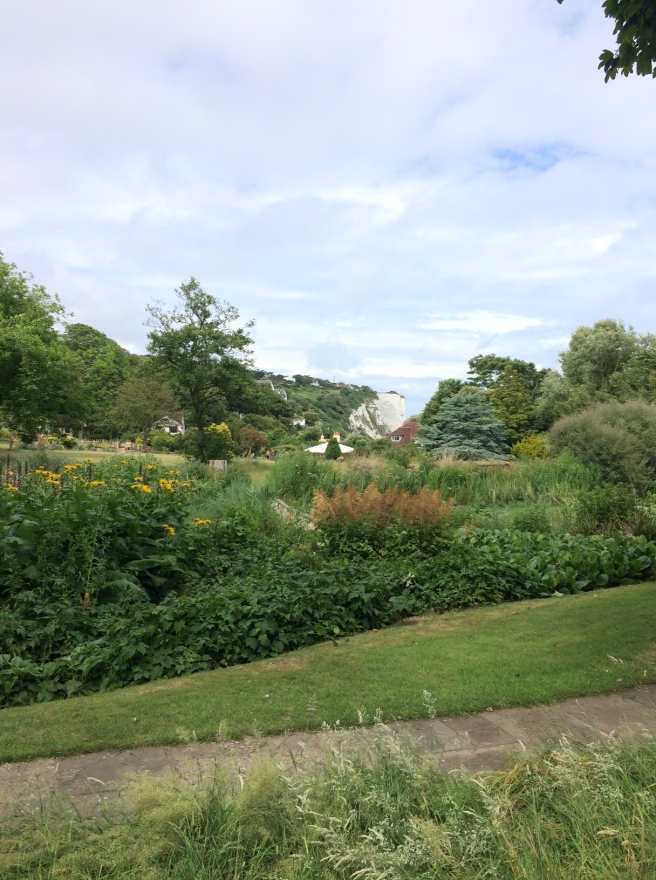 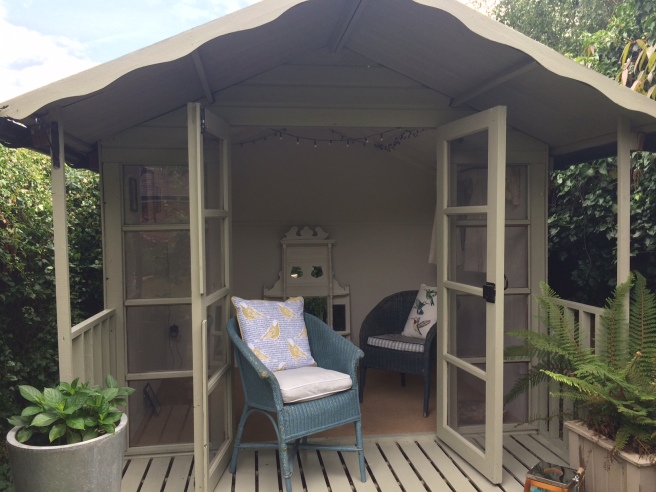